Meerclaw and the Gunboats - Part Four

December 09, 2022
The Count and I return to the main conference chamber. The fleet Captains greet our arrival with another shout of "Honor!" and R'Rorash calls the meeting order. He motions to the fleet's Chief Science Officer to begin. I remember C'Nisar from guest lectures on theoretical fighter and small ship designs from the academy; this should be interesting. He has a knack of making difficult information digestible to warriors such as ourselves. I also have more than a sneaking suspicion that his presence as main scientific advisor to the Count on the Lyran Front is no coincidence; no doubt he has had more than just a paw in the new fighter design I have just been shown. The Count notes my interest and his whiskers twitch in amusement. "Gentles," says C'Nisar, "My team has been tasked with analyzing the wealth of information provided by Ser Meerclaw and his Science Officer on the Tempest, Commander  C'Taia . The stratagem of pooling information from t
Post a Comment
Read more

Meerclaw and the Gunboats - Part Three

December 09, 2022
Debriefing at Zamyan The fleet reconvenes at our recently reconquered planet of Zamyan, which also happens to be my home. Count R'Rorash calls a war council on the Titan  for all of the senior Captains, including myself. Also present is the Baron, who has been our Count's second-in-command for several years now due to his seniority as a nobleman and, most interestingly, the fleet's Chief Science Officer. He watches the proceedings carefully. The vid feeds play the course of events of our encounter with the new Lyran ships at their Battle Station, and the Count calls us to order. We all stand to attention and then the voice of the Patriarch of all Kzinti is broadcast into the room: "Our highest honor, the War Medal First Class, is hereby awarded to Captain Meerclaw, currently of the Light Carrier Tempest,  for audacity and initiative in the face of overwhelming odds. He not only saved two ships from the Lyran enemy, but has gathered military intelligence of such a sig
Post a Comment
Read more

Meerclaw and the Gunboats - Part Two 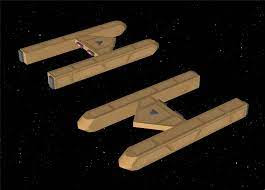 Our part of the fleet warps into position, with the Lyran Battle Station just off to starboard front. My Helm Officer is pleased with his efforts and justifiably so; the Medium Cruiser squadron is at our port and our two (New) Heavy Cruisers are screening us. As commander in our part of the battle, I have already set up a conference screen with the Captains of these ships. This turns out to be a useful initial precaution because it saves valuable time when we see what we are up against - and it isn't pretty. Our fighters are launched as per standard operating protocol. A quick viewscan shows that the enemy has committed large numbers of fighters in our vicinity. Off to our port they have a pair of War Cruiser class carriers, fronted by a Scout-class War Cruiser; this alone gives them two dozen fighters and a lot of phaser power, although they lack the longer ranged disruptor suite. Inside them is their main fleet command element: a Dreadnought, a Battlecruiser and one of their New
Post a Comment
Read more

Meerclaw and the Gunboats - Part One

December 09, 2022
Captain's Log, Stardate 178.5.12 We are on approach to a Lyran Battle Station that has been placed near the site of one of our County's old border stations from before the war - the same one, in fact, that we defended against the initial wave of invasion almost ten years ago now. It feels strange to be revisiting this region. Much has happened during the intervening time. Our forces have managed to keep the Coalition at bay after their major assault on our capital planets destroyed much of our military infrastructure. Painstaking efforts have combined with timely financial aid from the Federation to stabilize our situation, albeit at great cost. Much of Kzinti space is now an open battlefield as fleets criss-cross in various attempts to advance beyond a stalemate. Our current strategic situation is quite good, with the combined Count's and Duke's Fleets now attacking towards the original border zones for the first time. The Marquis' Fleet is operating in conjuncti
Post a Comment
Read more

The various races and rules that have been appearing for Star Fleet Battles  since I originally played it in the 80s and 90s have mostly left me cold. This may simply be because I have not had a chance to play them. In any case, re-absorbing the game is taking enough of my time and energy. However, occasionally something happens in my ongoing Federation and Empire  campaign to change things around a little, and this has happened recently.  I have automated rules for the Andromedans who, unknown two the galactic powers, have finished constructing their network of rapid transit bases. It is now Spring 178 and the Andros are shifting their strategy to probes into the territories of the various empires. Mostly this is intelligence gathering, but they will go for a target of opportunity should it present itself. This has just happened with an Andromedan force raiding its way across Klingon space in the sensitive rear areas on the Hydran Front. The invaders came across an important Klingon
Post a Comment
Read more

Kooth on the Romulan Front 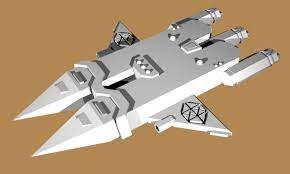 My new command, the Double Cruiser Ace , is transferred to the Roman Front to fight as a Federation auxiliary in tandem with another cartel's Heavy Cruiser.  The DCR is a strange and ungainly vessel, an early attempt to produce a reasonably heavy vessel by welding two CR Light Cruisers together. Our option mounts are configured for plasma torpedoes; this will give me an opportunity to see an entirely different technology in action from warfare in the Kzinti or Hydran regions. In the event, our two ships are crippled when we come up against a major Roman command contingent; our sacrifice, however, permits the Federation ships to close against the other Romulans and win the engagement. Definitely a peculiar ship!
Post a Comment
Read more

October 18, 2022
Heavy fighting continues across our former territories as we fence mightily with the Coalition forces. Our homeworld itself seems to be safe, and the damage previously wrought to our infrastructure by the invaders has mostly been repaired; it is rumored that we have even been able to re-establish some defensive installations on the planets nearest Kzintai. I fight in several more engagements before being promoted to Captain of the CVL Light Carrier Tempest . Our previous captain is promoted to command of the CVS Strike Carrier Sabre , which has been crippled in one of the many combats that have been taking place. As usual, our forces allied with the County are facing the Lyrans, and it shows in the list of crippled heavy ships. Unfortunately, the Count's heir C'Rorish is killed in action as the Sabre  is crippled, so a replacement captain is needed. The toll among our crews and noble officers continues to be high; although we would not say that the situation has stabilized, we
Post a Comment
Read more
More posts