Heavy fighting continues across our former territories as we fence mightily with the Coalition forces. Our homeworld itself seems to be safe, and the damage previously wrought to our infrastructure by the invaders has mostly been repaired; it is rumored that we have even been able to re-establish some defensive installations on the planets nearest Kzintai. I fight in several more engagements before being promoted to Captain of the CVL Light Carrier Tempest. Our previous captain is promoted to command of the CVS Strike Carrier Sabre, which has been crippled in one of the many combats that have been taking place. As usual, our forces allied with the County are facing the Lyrans, and it shows in the list of crippled heavy ships. Unfortunately, the Count's heir C'Rorish is killed in action as the Sabre is crippled, so a replacement captain is needed. The toll among our crews and noble officers continues to be high; although we would not say that the situation has stabilized, we are at least holding our own. Some of the pressure has been taken from us by the Federation 4th Fleet, which is operating at the border junction between ourselves, the Federation and the Klingons - the flatheads have been pushing into Klingon territory, attacking their border Battle Stations. At lead one has been destroyed, and this news is helping maintain morale.

Popular posts from this blog 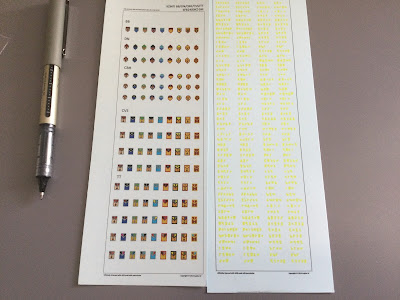 I bought some of these. They took well over a month to arrive from Canada:  For the Kzinti: ship insignia to the left as you look at them, and ships' names in suitably off-looking script to the right. I've tried them out now on the model I put together as a Kzinti Starbase, and they are rather disappointing. The sheet of Kzinti names comes out very dark, too dark for use, in fact, even though I tried them on a painted stripe of white. The ship insignia are also dark, but those ones are usable. I'll probably paint a little white rectangle on the ships themselves to make the decals 'pop' a bit more. One thing to look out for is that the entire sheet is covered with transfer film, so you need to cut around the individual decals to make sure there isn't too much extra - that can become a bit awkward when you are trying to put them onto a ship panel. This reminds me of older transfer sets like the old Revo medieval ones. Overall verdict: worth getting the insignia s
Read more

It's going to get nasty 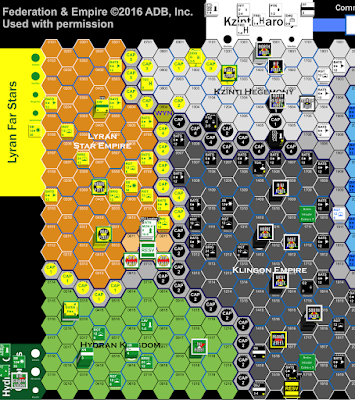 The Coalition machine moves on the Kzinti capital, while the Klingons amass a very large attack force against the Hydrans: On the southern front, or Rimward if you like, the Klingons threaten the Hydran Starbase with so many ships that the little guys can't afford to react out and leave the installation undefended. This finally results in the loss of the last two of their border Battle Stations. The reason the Klingons don't attack immediately is lack of command ships. The Lyrans don't have the same problem, though, as the Enemy's Blood, Foremost and Far Stars clans all assault the Hydran Starbase on that front.  In the north, the Coalition moves on the Kzinti capital with purpose: It was a really good idea to build all those extra defences. You might be able to make out four separate extra fighter squadrons on the Kzinti side; these are from the major planet right next to the capital hex. Rather than try to defend that as well, they sent the fighters to help the home
Read more

The Deathblow is destroyed

September 30, 2022
I have to report the loss of my Orion Heavy Cruiser Deathblow  in action over the Hydran planet of Phthah III. The Hydrans are on the offensive now, driving towards their homeworld, and on the way Phtah III is liberated from the Lyrans. The Deathblow  is tasked with protecting a Hydran Tug carrying Scout pods, and the Hydrans use our vessel to absorb the ESG power of three Kyran War Cruisers. One can of course see an ESG ram being lined up, so we are able to abandon ship in plenty of time, but our ship's sacrifice saves the Tug. Our s is in fact the only loss on the Hydran side in the battle, because their cruisers are easily able to mop up the Lyrans in return. This is in fact a typical use of resources by the canny Hydrans; all they lose in the battle are fighters and our Orion auxiliary, while they force the Lyrans onto the back foot and secure Phthah as a forward base.
Read more